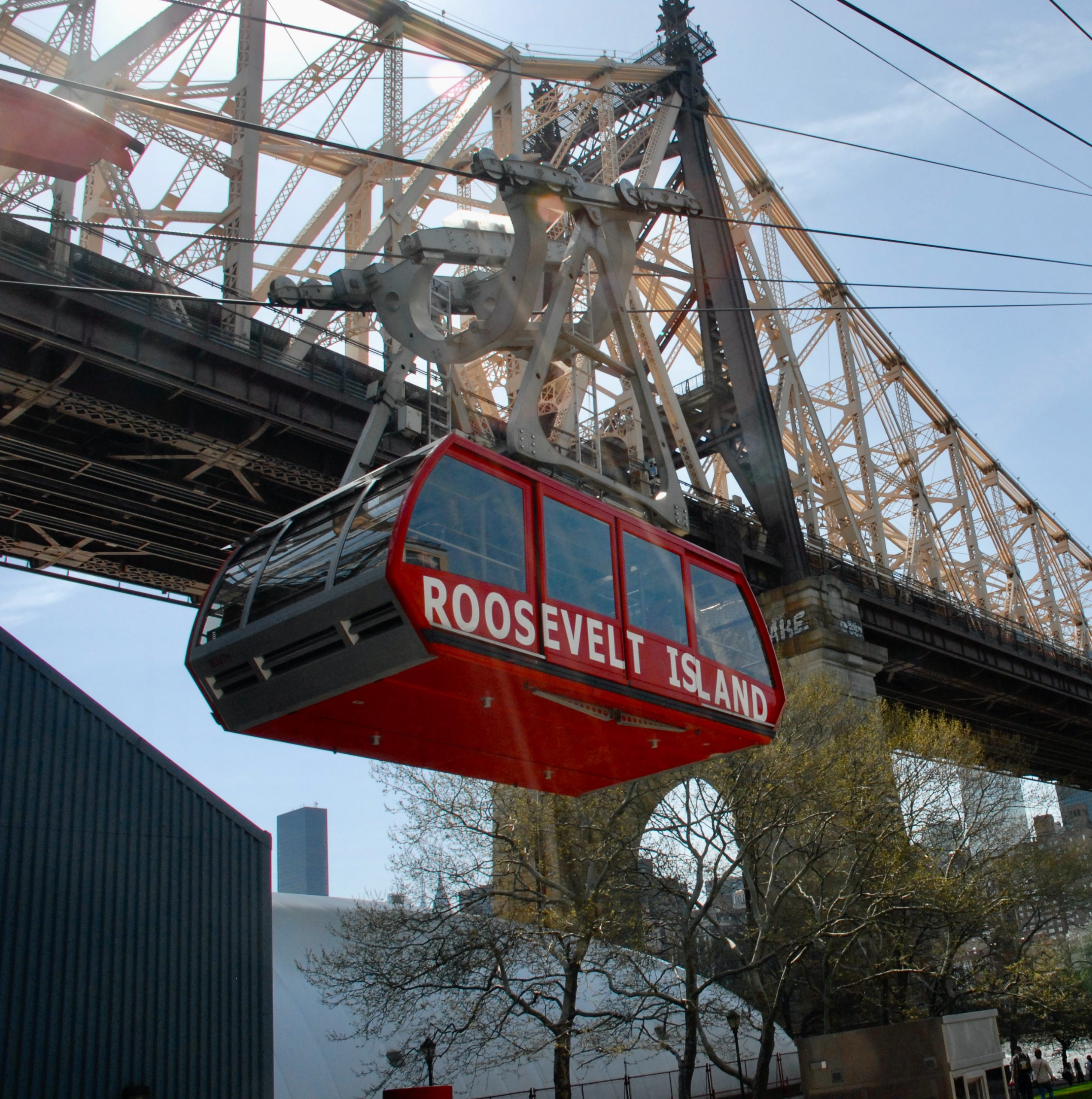 Note: Face masks are required at all times, but all other COVID-19 restrictions have been lifted.

Because of the COVID surge, each cabin now has a passenger limit of 55 per trip. The system is otherwise operating at full service.

The Roosevelt Island Daily offers this guide as a public service..

What does the Roosevelt Island Tram cost? Although not managed by the MTA, the Tram operates within the New York City Subway MetroCard system. Transfers are easy between systems. You swipe a MetroCard at turnstiles in either Tram Plaza. Buy MetroCards at either location. Fares are currently $2.75 per single ride, same as MTA Subways and Buses. That includes one free transfer within the MTA system. Note: The Roosevelt Island Tram does not participate in the OMNI pass system.

The Tram to Roosevelt Island Is Fast But Fun

Where is the Roosevelt Island Tram? The most popular access point is the Tram Plaza on 2nd Avenue, between East 59th and East 60th Streets. Closest subway access is from the N, R and W station one block west at 3rd Avenue. Also, one block farther west is the 4, 5 and 6 59th Street station on Lexington near Bloomingdales. Q32 and M102 buses also stop within a block of the Tram. Reach the Roosevelt Island Tram by F Train, one block north, Q102 Bus or NYC Ferry, both with stops adjacent to the Tram Plaza.

How long does the Roosevelt Island Tram take? The Tram glides alongside the Queensboro Bridge for roughly four minutes. Times vary as little as the cabins speed up or slow down, depending on need. Cabins rise 250 feet. The city spreads out on all sides. Views are great anytime, but nighttime rides are spectacular.

When is the Roosevelt Island Tram open? First cabins sweep skyward at 6:00 a.m and run at 15 minute intervals until 2:00 a.m. They run twice as often, every 7 1/2 minutes, during rush hours when demand is high, for example, when the subway is down or there is a special event. If possible, visitors should avoid rush hours when cabins can be cramped, and you’re better off waiting for a better experience and view when local residents aren’t using the Tram to get to and from work. RIOC Red Buses offer free rides to most Island locations.

It doesn’t happen often, but Tram travel is suspended during thunderstorms or when winds are very high.

How do I get around Roosevelt Island? Roosevelt Island, from north to south between channels of the East River, is just two miles long, and it’s an easy walk to Shops on Main in the heart of town, numerous historic sites, the sprinkling of parks throughout the Island, FDR Four Freedoms Park and Cornell Tech.

As unique as the Tram, free, full size RIOC Red Buses carry passengers to all points. Just watch for frequent red signs and catch a free ride. The buses, like the Tram, operate by the Roosevelt Island Operating Corporation .

Brief History of the Tram

The Roosevelt Island Tram was built and operating in 1976 as the modern community, envisioned as the City of Tomorrow, welcomed its first permanent residents, planned as a temporary solution until a subway connection was built.

But construction lagged, and by the time the local Subway Station opened in 1989, the Tram was a beloved local fixture. Residents put up a fierce fight, and finally, they won the battle. They saved the treasured system.

Eventually, New York State rebuilt the entire system, except the towers, replacing everything else with newer, more reliable technologies.

buy me a coffee. Thanks.

Tourists flock to the Tram, which doesn’t disappoint, but visitors experiences increase during off-peak hours. Residents rely on the Tram for commuting, and the cabins tend to crowding in rush hours.

Quick Tip: However you find your way to Roosevelt Island, smart visitors stop by the Historical Society’s Kiosk in the Tram Plaza on Main Street. Find souvenirs, maps and refreshments along with helpful suggestions and answers from a knowledgeable staff.

More from the Roosevelt Island Daily

All aboard the Nostalgia Trains!